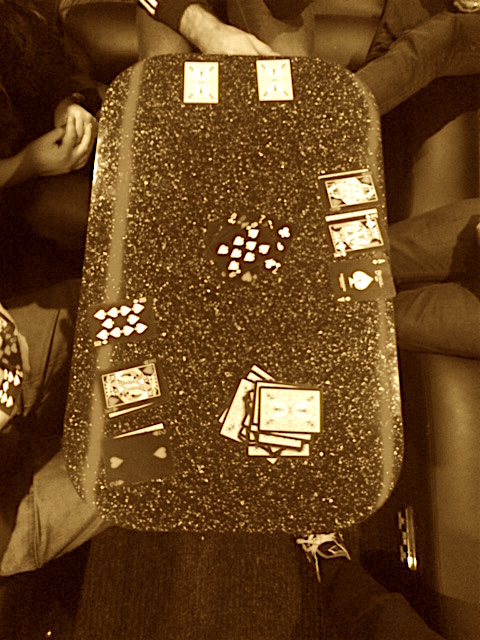 We’re on our way from Köln to Stockholm. A quick ferry ride, some wind and diesel fumes in your hair, and back on the bus for X hours. It’s nice to look outside and see some daylight. Low sun on wind turbines casting long shadows, dark scythes skimming over flat green fields.

What a difference sleep makes. Literally seeing the world in a new light. That venue yesterday was pokey and dark. I barely saw daylight.

Drummer Rick slipped in the wee hours before we left Köln. There’s a cut above his left eye. Tram track. Thankfully he’s okay. This sort of thing can end tours. Think of Dave Grohl sailing off the stage and cancelling shows. A roadie complaining of stress is one thing – imagine having a small army to feed.

I remember the early days of big Ash tours. Australia..? Not sure. Could have been Europe. Doesn’t matter. Tim took a few hours to himself and went off radar. No one knew where he was. Or if anyone did, they weren’t saying. At the time the band were doing a lot of press, the show schedule was mad, everyone was tired and doing the best they could.

A few of us were in a laundrette. A fellow crewmember voiced concern about Tim’s disappearance. What was said went something like:

I quietly sympathised with Tim. Who wouldn’t want to tell the world to give them a break for a few hours? But some people don’t see the smaller picture.

Imagine being 18 years old, and grown men depend on you for a living. In the end we didn’t lose any work. Within a few hours things went back to normal. To this day I’ve no idea what Tim was up to. Not my business. Everyone needs a break.

In my previous post I talked about putting on a brave face for the good of your masters. This poor teenager had to put on a brave face for his – the almighty record company. It’s not music that causes misery for bands and roadies – it’s money. The show goes on, and you march at gunpoint onto the stage.

A day off does wonders for the soul. Even if you’re stuck on a bus between Germany and Sweden, and an armed border guard gets on.

I’m sitting in the top lounge at the back of the bus. He steps in. It’s just me. He turns to look down the gangway to see bleary-eyed Gollums peering out through their curtains. (A few hangovers today.) His knurled pistol handle looks almost plastic. There’s a flap over the hammer keeping the whole gun snug in its holster.

I realise I’m standing up, and think it’s probably better if I sit. That way hopefully he’s at ease. Remember, things are tense all over. So I go back to my laptop and minutes later, a springer spaniel sniffs around the place, jumping up onto the seats, nosing through bags.

I don’t go in for any drugs anymore. In fact so far on this trip I’m clean like a born-again. No drink, no smoke, no meat, no fun right? I’m glad of it sometimes. Imagine being the guy who gets busted, and leaves the tour a body short. I don’t need that kind of blame or responsibility on my shoulders. Sometimes it’s hard enough looking after yourself.