By 4 pm I didn’t really know what was going on. The gear was all set up but the schedule had changed.

This is supposed to be a shared headline tour. Some nights Ash will play first, then We Are Scientists. Other nights it’ll be vice-versa. But we’re missing someone. Keith the singer/guitarist from W.A.S had to take care of something. He was at Bataclan. He and his wife left the venue 15 minutes before the attack. You can imagine how that would give you the jitters. He had to take care of something in the US, so he’ll meet up with us tomorrow. When loading in earlier, a local crew member said:
‘I heard about the guy in the place.’
You don’t need to use specifics.

Ash and the other two guys from W.A.S are working a few songs out, trying to give ticket-buyers value for money. It’s a bit up in the air, but they’ll cobble something together. Normally, not knowing what’s going to happen is bad for anxiety. But thankfully my job doesn’t enter the creative performance realm. If it was me performing tonight, I’d probably be on the ceiling by now.

No, I’m happy enough. All my gear works. By my gear I mean the equipment I’m directly responsible for which is all the guitar stuff. I keep an eye on bass stuff too, but a drum kit could be on fire and I’d be like, ‘What seems to be the problem, drummer?’

As far as the show itself is concerned I’m not worried. All chilled in that department. What’s not so great is the terrible sleep I had last night. We crossed the English Channel at 12.40am, so I managed a quick lie-down before we arrived in Dover. On the other side I got into bed after 3am, and had nightmares. I dreamt I was screaming, and no one in the bus could hear me. Then I woke up wondering if I really was screaming, and if everyone thought ‘Fuck this guy.’ Thankfully I was dreaming…inside a dream.

It was a million degrees in the bus. I can’t sleep sweaty and gross. I can take one night of that, but soon after, the body and mind get tired. That’s when the curse really kicks in. That’s when you turn to alcohol to keep you in bed. But booze interrupts up my herbal ride and the anxiety kicks in full-pelt. So it can be a toss-up: be anxious and sleep, but be alcohol-grumpy, or be anxious and tired, and only hope the voices will shut up.

Anyway, for now I’m happy there’s some decent food in the dressing room. Hot water’s good too. You have to disregard the dead mouse in the shower. Poor wee thing. Apparently I was oblivious to it.

If you’re an Ash fan, you know the song Kung Fu. Before they played it, Tim dedicated it to a fellow named Raphael, shot at the Bataclan. Apparently his favourite Ash song was Kung Fu. Like I said before, mentioning Bataclan is inevitable. Its reach is far.

The thrown-together supergroup were due on stage after the last Ash song. Introducing it, singer Tim told the crowd to hang tight:
‘We have something up our sleeves.’

It was then a certain Ash member looked to me and mouthed the words ‘Wizard’s sleeve,’ and I doubled over laughing. If that means nothing to you…well it’s a tad rude.

After the gig it’s off to Köln. Some sleep would be nice. 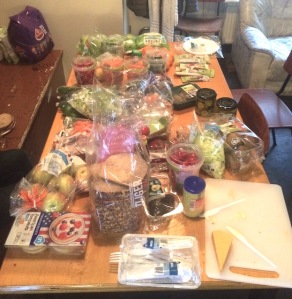