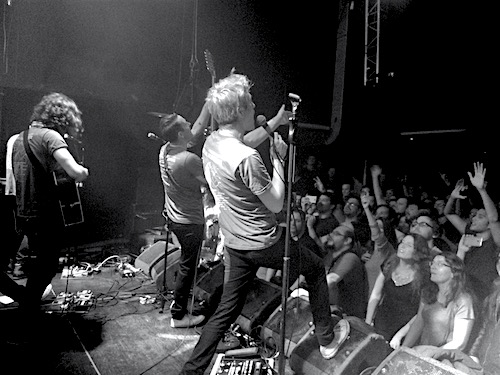 Well this is it. You don’t need me to explain how it could be nerve-racking, rolling into this place. But my guess is…even if it all kicked off tonight, we’d be safe. I think this because we’re in a small venue, somewhat out of the way…on a boat. Yep, they finally got me on a boat.

They sneaked that one in…and for the past few days I’ve been dreading this poxy little venue. I’m told it’s smaller than the crappy Italian one. But then I’m a gullible soul. I guess I’ll believe anything you tell me. The place is actually bigger than Bologna, with room to breathe either side of the stage. Only problem is…stairs…. But there’s a lift. It’s broken. So then…a basement gig…on a boat. Sigh…back you get…into the poxy category. 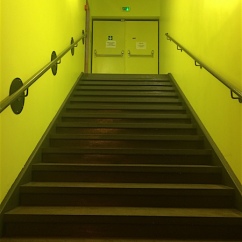 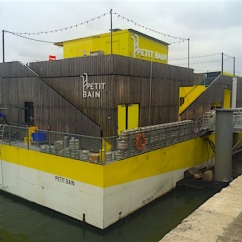 Admittedly, It’s less of a boat and more of a cuboid on the river. My son saw pictures, said it was a glorified shipping container. He’d be right so long as you welded around 24 of them together.

This is the last gig with We Are Scientists. I’ve really enjoyed their music, their humour, and general all-round peopleness. I admit though, I’ll be glad when the workload is back to normal. If only they had their own backline tech with them, I could’ve done this for another three weeks for sure. But no…I shan’t be signing up for another tour like this…the only backline tech on a two-band-shared-headliner-jam-at-the-end club tour. The three of us – tour manager, sound, and me – have helped each other out, but still…I’m tired stiff and sore. This is a job for a hungry 20-year-old who needs to build their CV. I have the skillz of two 20-year-old roadies…but my body is that of a disgruntled old rodeo clown.

Mentally healthy thingies: I’m good today. Considering I’m on a floating basement…and the other stuff. If I believed everything I read on social media, I’d think I was in a city overrun by all teh terrarismists and they’re killing everyone right now forever, and I should get a gun and protect my family by accidentally shooting them all. No, thankfully I’m feeling pragmatic, smarter than that.

Or maybe I’ve got it all wrong. Maybe I’m a pinko hipster, and I’m blind to the four horsemen thundering down the Seine. Well if they are…if this is the end…I’m still quite chipper. However…

Okay maybe there is one thing bugging me. The get-out. We need to finish up on time, overcome traffic, cross the Channel, crossload the Scientists’ equipment in the morning, and make our way to Bristol for a show. This morning while we discussed stage times, set lengths, and the need to get away quick smart, I could feel my stomach tighten with anxiety. So…pop a pill…things settle and it’s business as usual. In Paris.

I saw an old face before the show. They’re all old faces now. I’ve been working with Ash since 1995. Anyway there’s this guy who’s been to countless Ash shows in France, and he looks like George Lucas. I don’t know his name but I’ve talked to him several times. Tonight it was hey how are you, haven’t seen you in ages, so do you live in Paris?

He lives in Paris, yes. I guess there’s a part of me searching for drama, but there is none. He doesn’t seem to bat an eyelid, attending a gig in the city where…well…you know. Maybe that seems weird for those of us who don’t live here. I think we (the non-French) would be conditioned to be apprehensive. I think we forget sometimes, what France has been through. Forget all the turmoil before the 20th century. In the past hundred years alone…two world wars including Nazi occupation…gun attacks on Charlie Hebdo…in the streets…and at Bataclan. This place will survive. It always has. And to me that’s inspirational.

So tonight, during the W*A*S*H set, I honestly nearly shed a tear. People were having a ball. It was (to coin an old Ash in-joke) electric. For real. The people were so good. My side of the stage was crowded avec les publiques, and unlike most other places, people made way for me when I needed to scramble on stage to quell the chaos of six musicians in a small space…or to help Tim make a landing on stage after crowd surfing while playing a guitar solo. There was just a huge vibe of admiration and mutual respect in that room, all of us together, and I couldn’t help but think…

Bataclan… What a waste. What a ƒ—ng tragedy. The world outside is an angry and dangerous place. But guess what? Guess what we’re going to do. We’re going to rise above it. We, who live and breathe music…we’re not getting sucked into the quicksand rhetoric of war. And remember, Bataclan was a direct hit on us. We’ll recover. We’re recovering now, without the help of any government blinded by greed and revenge. We’re united. I watched people having such a good time, and I honestly thought…

How ƒ—ng dare they… How dare the oafs at the top try to drag us down to their simple-minded, thuggish level. We’re not falling for it. They might have the banal press headlines, and the unquestioning loyalty of the fearful, and lobbies to vote in, and guns and planes and bombs…but we have each other…in Paris. 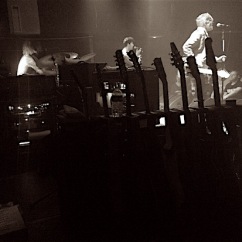 “To die by your side – well the pleasure, the privilege is mine”

The crowd sang along. So I take back what I said about this being a poxy gig. I’ll never forget this show. It proves we can overcome grief and sadness without resorting to violence.

After the gig, after the equipment was back in the trailer, and the boat was quiet, and we were the only people left on it…we had a moment…in the dressing room. There was relief. We did it…Paris. We exchanged some ironic high-fives to celebrate our safety…but truthfully…I wasn’t convinced. I said: