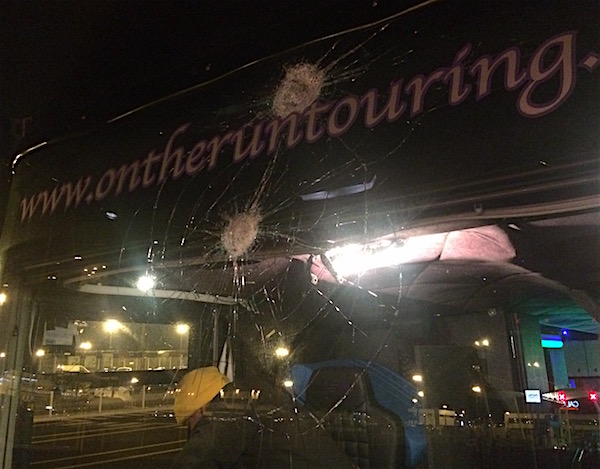 These days, catching the ferry from Calais to Dover, you have to get off the bus in Calais and clear passport control. No matter what time you get there, you peel yourself out of bed and traipse bleary-eyed though officialdom.

It’s 4am and I slide out of my bunk. Mark tells me ‘The front of the bus is smashed up.’

I thought he was joking. I got out, saw border officers looking at our bus, and sure enough…

I had slept through the incident. But I pieced together how it went down: on the approach to the port, police in riot gear line the road, shields at the ready. There are tents everywhere. It’s a bit like Glastonbury, without the fun. A lorry ahead jams on the brakes…looks as if it’s going to be overrun with people trying to get in or on. Crates and detritus are thrown on the road, forcing vehicles to slow down.

‘Lock the door!’ comes the command from the driver seat. We’ve slowed…enough for a few plucky souls to chance a grab at the bus door handle.

Moments later a figure appears on the road. He wears a scarf covering his face. He sticks his hand up for us to stop. Bus driver Paul says no ƒ—ng way and floors it. Masked man dives out of the way…from nowhere a dozen people appear, and pelt the bus with rocks. Paul’s window is smashed into a thousand bits. It’s just not there anymore. A fist-sized dent decorates the side of the bus. The front window is pocked with two milky craters.

Everyone’s blaming the French police for not doing enough. One story goes like this: a couple’s car has been damaged. All they want is for the police to sign something…just a few words for the insurance company…to say the car’s been vandalised. Police don’t want to know. Some UK Border staff shake their heads and say ‘It’s the French.’

The big question is, what’s the point in attacking vehicles? I don’t know. Food and supplies? Bored out of their minds? Do they feel the world needs a reminder that they’re all still here?

I remember when I lived in Downpatrick, kids would pelt buses, and the big kids would set them on fire. Maybe you have an opinion…these people in Calais could be immigrants…economic or otherwise…or refugees. The point is anyone can do vandalism, regardless of label or status.

As for trying to board vehicles, there’s no point. Inspectors will discover chancers. I wonder if anyone is sharing this information with the people in the Calais camps. I wish I knew more.

The ferry ride was unremarkable. On the other side we headed straight for the bus yard…A shaken Paul likely freezing half to death with a gaping hole in the cockpit. We swapped buses. Paul’s going home for a day. We set off again for a service station on the M25 and dropped We Are Scientists. A van came for them, we filled it with their stuff, and we all said our goodbyes. They’re playing their own show in Southampton tonight. We’re going to…

Bristol. Stairs. Grr. At least there’s a couple of strapping young men to get the gear up. Inside there’s a ton of space for guitar world. Four guitars instead of nine. Two amps instead of four. Less weight, less stuff…luxury! 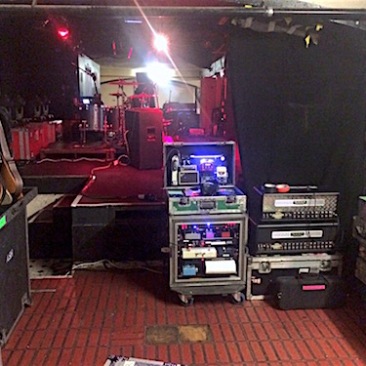 Mental things: despite all the drama, today was a very good day. I feel obliged to say ‘It’s great to be back in the UK.’ I guess it is, but with Paris behind us, my ultra-pragmatic side says there’s no safe haven anyway. Mainland Europe is only an hour ahead, but still, it’s nice to be in the same time zone as my family.

The gig went well tonight. Flawless I think. During the load-out, one of our helpful local crew asked me how I can do this job…lugging gear around…in the rain…playing real life Tetris in a trailer…and remain so cheerful. I said there are worse jobs, and much worse days. Between me and you, laptop, my situation could be much worse. Imagine feeling stuck in Calais, no sense of purpose, no voice, nothing to do, chucking halfers at buses. At least I have some people who understand me.

I fear, dear laptop, that we’re coming to an end. The hard graft is over. That W*A*S*H tour was gruelling in its way, and we’ve had plenty to talk about. But tonight’s show felt like a comfortable old hat. I think we’re going to have to stop seeing each other so frequently. The workload is lighter (famous last words), and the pills are doing their work. I know in the beginning I said “the next five weeks”, but maybe I’ve said all that needs saying for now.

Paris is done and dusted. Our government are doing what they do best – telling us that war is good for us…that the ultimate mental illness is good for us. What can we do? Keep going, keep believing that honesty will set us free.

For now, from the Bierkeller in Bristol – adieu. 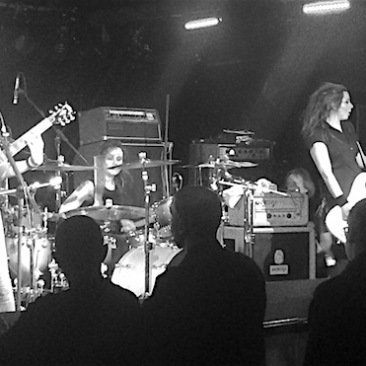