The bus…before I go on I have to get something off my chest. Remember the bus that got damaged outside Calais? Well, the replacement bus is nice, but for a couple exceptions.

DISCLAIMER: I’m in a jovial, sarcastic mood. Take what you read with a pinch of salt. The pills are working well…

Firstly, the toilet. Every tour bus has one, and none of them are ever nice, but this one…fuck sake. You know that usual feeling in the morning…wake up, creak your back, stumble out the room, yawn, curse the sun… Do that, but then fly down a steep set of stairs, and fall into a tiny space…so tiny you can barely fit. You certainly can’t stand up in it unless you’re under five feet tall. I’ve banged my head at least (not exaggerating) a billion times. There’s a sticker on the wall that encourages you to sit down while you pee. NOT A CHANCE IN HELL MY FRIEND. If we’re barrelling down the motorway and I’m in this thing, and we hit a truck, and I die of a snapped neck, at least the paramedics won’t laugh at my sitting-down-to-pee corpse. Men pee like they die…pissing on their feet. Yeah so…that. Then there’s my bunk.

Squeak squeak squeak fucking squeak. As soon as the bus gets rolling, the noises begin. It’s like a terrified ghost ratting its confines, screaming for freedom. And my body. Every morning my entire right side feels like it’s been beaten. Probably by an angry terrorist ghost that not only wants to beat me, but have sex with me too, just because terrorist rapist ghost is more effective than regular ghost.

So anyway outside the bus…Manchester. We got here early, parked at the venue. I got up, banged my head a thousand times doing one pee, changed, gathered my crap, and left sex-ghost behind. We’re too early for the hotel…and I need* to do xmas shopping. (Need is debatable.) So I walk around from 10.30am until 4pm. 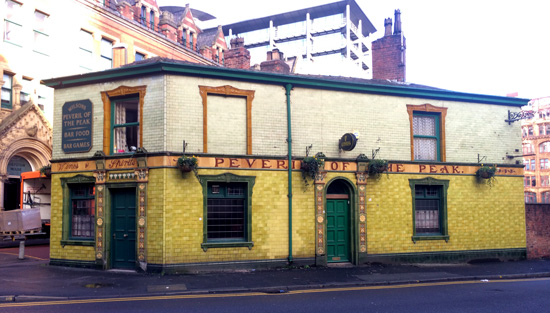 I’m in love with the outside of this place. It’s all tile. Inside there’s a hundred thousand skinheads who want to make me into a hat, so I stay away.

I was looking for one shop in particular. It took me ages to find it. Walked for more than a mile to discover it closed. On a Monday. In December. Fuck you, shop. So I Googléd another similar shop…and…fuck you, nonexistent shop. Getting my hopes up like that. Anyway, the failed outing had a silver lining. This interesting little area: 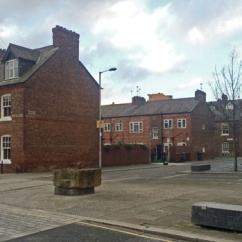 Around here it’s all Loom Street, and Cotton Street, and Silk Street… For those of you who’ve lived in a hole all your life, Manchester was MEGA for cotton production. These wee streets have almost certainly been gentrified somewhat. I’ve little doubt that in the 1800s, this place teemed with miserable sods who died young after working in conditions EVEN worse than a tour bus. Charles Dickens himself probably visited here and punched an urchin because that was how urchins earned a living when they were skiving off from man’s work in the mill.

Of course, one look at this webpage, and I’m made a liar, but my version of history is sexier.

Then I found this place:

I saw this and was like ‘wow’. I’ll bet Charles Dickens fought with c—ts right outside here. I would. I’d bust open the time machine, go back, and be all ‘Who wants a kicking come on fatty yeah you and I’ll punch your boyfriend as well.’

Anyway, the history-fights annoyed me so I turned around, heading for the city centre, looking for more crap to buy. I noticed these two street names:

Michael Faraday was basically the great grandfather of electricity, and that Bunsen thing is what you used to incinerate your mates’ schoolbags in chemistry class. At this point all the rabid dogs that had been following me since Coketown got sidetracked by the kid I threw in their path. Their feeding frenzy got me hungry and so I Googléd pizza, and bought some more crap.

These days I’ve become a pseudo muso…no day off seems complete without a visit to a guitar shop. I tried out these four dandies and made off with one. More than ever I’m looking forward to getting home and annoying the neighbours with my shit guitar skillz. 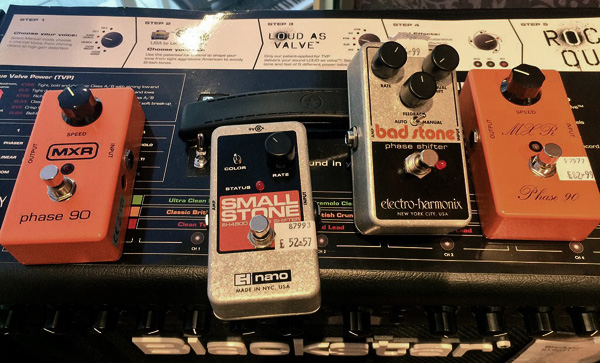 Right, I’m off for a cliché curry.